What is the main challenge for a pilot today compared to the challenges of 10-20 years ago? How has flying changed from the pilot’s view?

The answer to those questions isn´t easy but could be summarized as  “Information management”.

The good thing is that flying itself has not changed. I mean why an aircraft flies or can fly and how that is done. So in easy terms: When you are flying upright and you pull back on the stick or yoke the buildings are getting smaller. If you push forward they get bigger. And for my military pilot friends: yes, if you push that (usually) red button, no buildings anymore.

If we look at the aircraft that were available to pilots 20 years ago, most of them were still equipped with analog instruments. For example the altimeter. It was a round, coke can sized tube where you saw a round dial and some numbers on the side that was visible to the pilot. This altimeter was fed by ambient air pressure from a static port and a closed “chamber” of air at “standard” pressure. Similarly for the airspeed indicator and the vertical speed indicator. So every instrument had a very unique task and was always at the same position in the panel. It was usually the same for navigation instruments like the Radio Magnetic Indicator (RMI) and Horizontal Situation Indicator (HSI). The needles and indicators usually always showed the same source of information.

If we look now at modern aircraft the work place for the pilot has changed a lot. No dedicated instruments anymore. Just flat “TV-like” screens, sometimes even “touch screens” which show nothing at all when they are not switched on. The good old altimeter even showed your altitude with no power on the instrument since it was purely mechanical.

In an Electronic Flight Instruments System (EFIS-) equipped aircraft there are no “instruments” anymore. It is loaded with sensors that feed computers like Air Data Computers (ADC) or Attitude and Heading Reference Systems (AHRS) and that information (Altitude, Speed, Attitude, etc.) is then shown on the modern Primary Flight Displays (PFD) and Multi-Function Displays (MFD). The PFD is where all the necessary information to keep the aircraft flying is shown and usually has restrictions on how a pilot can influence the display of those indicators. The MFDs however are usually completely open for pilot interaction and she or he can select whatever feels right. Remember, initially I said that each instrument had a unique task and source of information. Here is the problem. Now,  HSI can suddenly display any kind of source (like NAV-radios, GPS bearings, Flight Management System (FMS) routing displacements) to the pilots’ liking. The “buttons” have multiple meanings depending on the menu you are in right now. In the old style cockpit every button or switch had a distinct function. The MFD could show completely “useless” information for the current situation. So the pilot needs to know how the “right” information is selectable.

Then there are more Situational Awareness (SA) enhancers available than before. Just to mention a couple, Traffic Alert (TAS) or Traffic Collision Avoidance Systems (TCAS). Now suddenly there are other aircraft shown on your moving map that you would have never seen before (without the system). So you are looking outside the “window” (which is a good thing) trying to look for an aircraft that might be too far away and will never be a conflict just because you now know that it is there since you have that system installed. The danger involved is that due to wrong prioritization the pilot can miss the really important things he should be watching for instead at that very moment.

Another change that I observe is the quality of modern aircraft simulators. All the described “problems” can be practiced in the simulators or on desktop trainers that the avionic systems manufacturers usually provide.

I hope these examples (and they are not complete) explain why information management is in my opinion the biggest challenge for today´s pilots in modern aircraft. The challenge is even bigger for experienced pilots that grew up on the “steam gauges” since “old habits die hard”. And don’t get me wrong, I would rather fly in a modern cockpit with all the bells and whistles available at my fingertips than in an old steam gauged variant. The modern technology usually enhances flight safety by giving you better SA, if used properly. 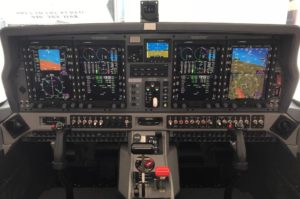 The cockpit picture shows the Grob G120TP with the modern “Digital Cockpit”. Grob Aircraft SE provides the complete Training System for it. Computer Based Training, a state of the art simulator and the aircraft itself are the key for modern and efficient pilot training.

The G120TP´s EFIS is provided by GENESYS Aerosystems and will be also used in Aero Vodochody’s L-39NG.

My hometown is located right in the middle between many US and German Air Force bases (Ramstein, Spangdahlem, Buechel, etc.). In the 1970s there was a lot of low flying activity from the Allies (US, French, Brits, Canadians) right over our house. My grandma told me later that when a jet was flying low, fast and loud above us, all the other kids were falling flat on the ground, covering their ears and screaming but I was standing upright looking and pointing at the jet with a smile. When TOP GUN aired in 1986 the virus was finally planted. However, nobody in our family was a pilot, everybody around me discouraged me and said I should learn or study something “real”.

However, in 1992 I joined the German Luftwaffe and there the journey started. I went through “standard” German Air Force Officer training and flying training afterwards in 1995-96 in the US (ENJJPT class 96-08). Back in Germany, I flew a bit on the Alpha-Jet before going through TORNADO training at RAF Cottesmore (TTTE MC252). My first operational assignment was in Fighter Bomber Wing 34 “Allgaeu” in Memmingen. We had a partnership with Fighter Bomber Wing 32 N噈ěšť nad Oslavou and in the following years I visited the Czech Republic many times and also flew the TORNADO solo flying display in Brno in 2001…2002 – Instructor Pilot course on TORNADO in Holloman AFB/NM USA. After that, I moved to FBW32 “ECR” in Lechfeld and became Director of Operations.  In 2007 I went back to the USA and was the Chief Pilot and Director of Standardization in Phoenix/AZ. 2010 Master of Aeronautical Science (Embry-Riddle Aeronautical University)  2011 back to Lechfeld in Germany and retired in 2012 from the German Luftwaffe.